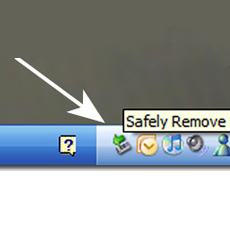 After writing the previous article about backing up, I was confronted again about whether or not to click that little “Safely Remove Hardware” icon in the lower right corner before unplugging my new USB backup drive.

And looking around on the web, it's going to depend on who you trust for advice. The problem lies in how and when the computer is writing to the drive. Obviously unplugging something when it's in use is a bad idea. For USB hard drives (and flash/thumb drives) there is usually an indicator that the drive is in use. For my Toshiba drive there's a little blue light that blinks when in use, and stays steady when it's not in use, but plugged in.

I've been pulling out USB devices out of computers since USB was made available, knowing well there was a “safer” way to remove it – click once on the little green arrow icon, and click the option to remove the drive. I've never had trouble doing so with Windows XP and USB devices. In fact, I've never heard of anyone having trouble pulling out a device that was sitting idle. So why would stopping the device first be safer?

The Microsoft response to this was written when XP was still in BETA, and you can read it here. The article says that older operating systems – Windows 2000, 98, 95 – used to write to the drive at different times, called a “caching policy”. The idea was that it could give the computer user more control by writing to the drive when the computer was less busy. And with previous versions of Windows we would see a warning that we did not safely remove the device. Kind of scary! This has been removed in XP because they got rid of the caching policy that delays writing to the drive. This is getting more technical than I thought it would, so I apologize for the jargon.

So what did we learn?